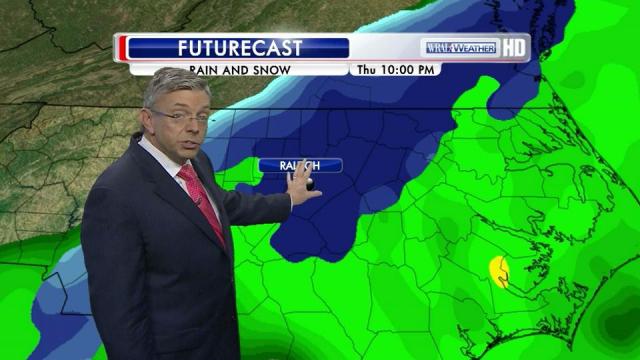 From WRAL: By 10 p.m. Thursday, WRAL Chief Meteorologist Greg Fishel said, “most of us will have turned over to snow here in the Triangle area. If you haven’t to the south and east, you will as we head toward midnight and the wee hours of the morning.”

It’s supposed to snow tomorrow night. I’m sitting at home watching the weather and reading about when it’ll hit the Triangle. Not a typical evening for me since we rarely get snow in this area.

Snow wouldn’t worry most people, either. In fact, my out-of-state friends laugh at us almost every time we panic when it snows. The Californians I know think it’s especially hilarious that we cancel school for just a THREAT of snow.

Folks in this area are just used to hurricanes, flooding, and thunderstorms. Not snow. You see, snow causes problems for folks here. Because we don’t get enough snow on a regular basis, most drivers don’t have experience with it. So sometimes a lot of drivers will panic because of the snow, causing an accident on the road. Those little accidents, in turn, lead to other accidents. Before you know it, you’ve got a mess on your hands.

Cars were sliding all over the place. Traffic was at a total standstill. Cell phones didn’t work because everyone was trying to use them at the same time.

I watched a school bus slide down a hill, coming directly towards me, and waited to be hit. I couldn’t move my car because it slid into a parked car. I couldn’t get out of my car because there were no safe places to hide. I sat there, totally frozen, gripping the wheel so hard my knuckles turned white, and waited for that sliding bus to hit me. It was total madness.

People still talk about where they were that day, and how long it took to get home. I finally got home after being in the car for five hours — covering a distance of only ten miles, at most.  My roommate spent eight hours on the road. Total madness.

The best part of that story? The chaos was the result of 1/2 an inch of snow. Yep. You read that right. HALF AN INCH OF SNOW. We made national news because of it. My friend in Sacramento, C.A., called me later to ask if that story was real. So embarrassing.

[Want to see video of it and read some stories from that infamous day? I found a few on this website. Enjoy.]

You gotta understand. Most folks here just aren’t used to the snow. We don’t see it often enough.

Each region of the States has its own climate, right? It’s cold in the North, warmer in the South. Hurricanes threaten the Outer Banks with regularity. California gets earthquakes and fires. Then there’s tornado alley. You see what I’m getting at? There’s a climate and something out of the ordinary can be totally devastating if people aren’t prepared or used to it, and especially if there’s no infrastructure to handle it.

So when there’s a threat of snow here in the Triangle, I do my best to stay away from the roads. There’s no point in risking it. Even though I do know how to drive in snow, the roads are full of folks who aren’t used to it.

Here’s another layer to this story. Tomorrow night we’re expecting 80+ people to show up for the TriFilm social. We (the hosts) are debating about how to handle the situation because a lot of folks are looking forward to it. What to do?

We’ll likely send out an email announcing that the event has been rescheduled. Some folks will scoff because they think we’re panicking about threats of snow. Others will breathe a sigh of relief. I hope, though, most will know that we made the decision with everyone’s safety in mind.