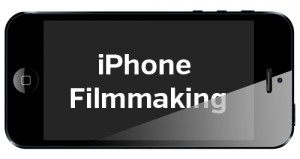 It seems like eons ago that I heard a friend say he was going to shoot a film using just his iPhone. I thought it was cool at the time but brushed it off as a schtick. Now I realize that he (and other iPhone filmmakers) were most likely a step ahead of me.

I held out on the iPhone for a long time. Remember when they were only offered through AT&T and you couldn’t transfer your phone number to another carrier? Seems like a long time ago, doesn’t it. Those were, quite honestly, two of the biggest reasons I held off on getting one.

Finally, one day I got a wild hair. I decided to quit my carrier and try AT&T and the iPhone. Less than 15 days and umpteen dropped calls later, I went running back to my old carrier and promptly returned the iPhone. What a waste of time, I felt. (And, yes, I actually was using my phone as a phone-phone, so the dropped calls were plentiful and incredibly obnoxious.) I got a Droid instead and it served me well for a long time.

Flash forward to today. My carrier offers the iPhone. And now I own one. I use it ALL THE TIME, especially for taking pictures and video.

The iPhone video and image quality is now better than some DSLRs out there, including one I own. It’s lighter, readily-available, and easier to use in most situations. And you can edit and share photos you take immediately, without having to download them to a computer. It can be pretty glorious sometimes.

Also, because it’s a phone — and there are so many other smart phone users out there — most passersby think you’re just shooting a home video. There’s a big benefit to that. You can be slightly more incognito than if you had a camera crew (with lots of impressive equipment) shooting the same situation, drawing too much attention from strangers.

Plenty of people have been shooting films on their smart phones. For years. I’m just a little late to the party because I was so tied up on some of the previous films I was making.

Now I’m finally exploring the idea of making a film with your smart phone. And realizing just how much you can accomplish with the tool that most people, quite literally, have in their back pocket. It’s incredible.

I feel like iPhone filmmaking could help me be a more prolific filmmaker. It’s a huge relief. I’ll continue exploring these things. You’ll hear more about this soon enough.