The 2014 Full Frame Documentary Film Festival has drawn to a close. I have since gotten a little more sleep and rest. I’m still processing all that happened but I promised you a recap of the last day of the festival, so here goes.

On Sunday I got to the festival in time for the awards luncheon. I love covering the luncheon because it’s one of the few times the majority of the festival comes together in one room. The energy is incredible.

As a volunteer, I interviewed people and posted their picture on Instagram with a quote (akin to Humans of New York). While folks waited in line to get into the luncheon, I introduced myself and chatted with them about their Full Frame experiences. Some people were die hard regulars who flew in just for the festival. Others were newbies who won tickets to attend and loved their first Full Frame experience. I also chatted with filmmakers, subjects of films, and fellows. 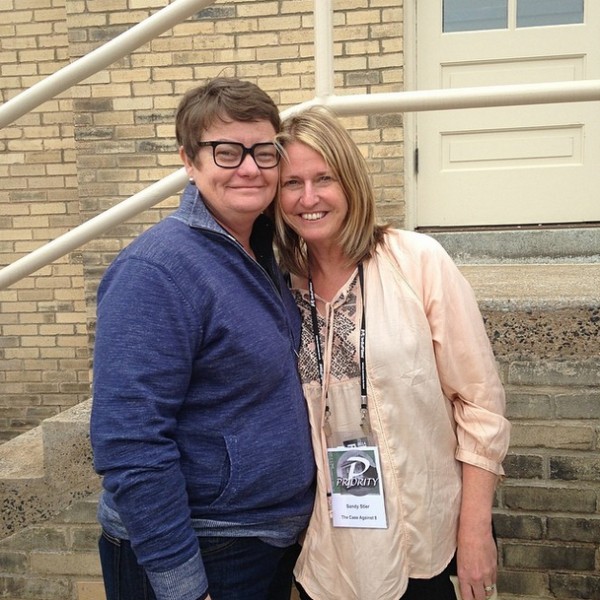 Kris and Sandy were featured in The Case Against 8, which screened at Full Frame 2014 on Saturday night. I’m a big fan.

The awards ceremony makes me feel even more like I’m at home at Full Frame. It’s tough to put into words. But when you hear these filmmakers take the stage and say the things you’ve felt for years, it’s an incredible thing. There’s a lot of love in the room.

After the awards BBQ ended, I scooted over to get in line for a film (after scoring a ticket from a kind stranger). I was sad to miss a few other events like the SDF works-in-progress and the School of Doc screenings, but I hope to follow up on those now that the festival is over. The secret screening has a media embargo so I can’t talk about it other than to say it was powerful and I’m glad I got the chance to see it.

After that screening I watched Evolution of a Criminal, which won two awards at the fest. I’m glad I got to see it but towards the end of the credits, I realized I was starting to fade quickly. There were two films I really wanted to see in the last screening of the fest, but I just couldn’t do it.

As I drove home that evening, my eyes started crossing. So I’m really glad I left when I did. Every year I convince myself to get a hotel in downtown Durham the next time so that I don’t have to drive back and forth to Raleigh so late. Maybe next year.

It’s such a bittersweet ending. I will miss being surrounded by my fellow filmmakers. I will miss all of the deep discussions that happen during the fest, sometimes with strangers. I will miss feeling like I’m on fire and ready to tackle my next big film. But I will be very thankful to sleep well this weekend!

Huge thanks to all of the folks at Full Frame who make the festival so great. You’re incredible. Keep up the great work.