Dreaming of an impact producer

The next film I’m making is titled Good Thing: A Documentary About Landfill Dogs.

Or, Good Thing, for short.

The documentary is about photographer Shannon Johnstone and dogs at the Wake County Animal Shelter (WCAS). I recently shared a blog post about it. Read the post here.

The film has been quietly in progress for years, and it’s time to start sharing more of it with you.

I talk about this a lot, but it bears repeating: collaboration is key.

In other words, a great team is one crucial part of making a great film.

If you see me standing in front of a crowd talking about my movies, know that I represent amazingly talented people who work on the film. They deserve mad props for being masters of their craft who consistently challenge me to be a better story teller. They’re my heroes. You’re encouraged to watch the credits all the way through every time so you can see their lovely names.

The first films I’ve made taught me so much, and I have been so spoiled by working with amazing people. I’m always seeking ways to improve how I build / lead my teams, so that everyone feels well guided and cared for throughout the entire process.

My dream team list for Good Thing is a long one. To be clear, this is not full time employment situation. But I’d like to find an impact producer help make this movie a success.

[Side note: every time I use the word team, I think of this scene from The IT Crowd.]

An impact producer measures the impact of the film.

These measurements capture the impact the film has on society through changing conversations, raising awareness, or altering legislation.

If you’re interested in exploring the role, read all about it here: impactguide.org. That site is filled with case studies, free downloads, helpful info, etc.

I also highly recommend watching all of the 2016 Full Frame Documentary Film Festival Speakeasy Videos (for free) on the TriFilm Society website right here. The Speakeasy Conversations are one of my favorite parts the fest each year; so insightful.

A great example of a movie with a significant impact is Blackfish (2013), a documentary about killer whales at SeaWorld.

Since the movie came out, a lot of good things have happened.

The public is much more aware of the mistreatment of the animals in captivity. SeaWorld suffered from a serious drop in attendance, crushing their profits. The company announced it will stop breeding killer whales, which is a huge victory. For more info on the movie and it’s impact, check out this free PDF.

The movie is a great example because it has similar themes: animal treatment, breeding, captivity, psychological effects of being in captivity, interactions with humans, mankind’s responsibility in the handling of animals that can’t speak for themselves, public perception, etc.

There are a lot of overlapping concepts with Good Thing.

What would our impact producer do?

An impact producer will measure the impact of the film.

They’d work side-by-side with me, and in collaboration with other Good Thing members.

There would be three phases to the measurement: before, during, and after the film’s release.

While the film is being made, the impact producer will capture the current state of things. What are people saying about animal adoption? Who are the key leaders in the industry? What is society’s perception of the subject? Where are they having conversations?

Conducting statewide on-camera interviews (man on the street style) – with help from the impact producer’s leadership/guidance – would be especially dreamy: before, during, and after the film is released. This will help take the temperature / measure conversations and if they’ve shifted.

The impact producer would help collect screenshots of conversations, magazine articles, newspaper clippings, links to videos, etc. We need help gathering this intel, as well as preserving/archiving and reporting on it. (Ideally, in collaboration with our community engagement and public relations / media outreach teams, so we have a way to capture media impressions.)

This worksheet is a great example of something that could help lead the impact efforts. 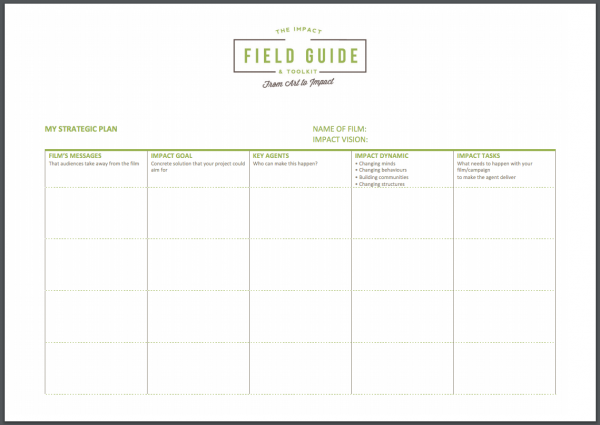 Who would enjoy being an impact producer?

The impact producer is a mover and a shaker; someone who enjoys investigating ideas and solving problems.

They spending time reading, researching, and seeking information. They like spending time online, finding answers and connecting with other people. They get along well with others, no matter whether they’re meeting for the first time or they’re old friends; often persuading and leading with ease.

Other characteristics may include:

The impact producer is someone who can manage a project and get it done, often by rallying the support of others. They have excellent written, verbal, and nonverbal communication skills that have been finely tuned over the years. They likely have a college degree and several years of experience in the working world.

It helps if this person loves dogs, too!

Want to get involved?

Your comment will automatically be emailed to me (Camden Watts, director of Good Thing). I’ll follow up as soon as I can so we can discuss the specifics: timeline, compensation, etc.

Know someone who’d be a great fit?

Want to help on this film or simply follow along?

I’ll be share more ways to help very soon. In the meantime, here’s what you can do right now: