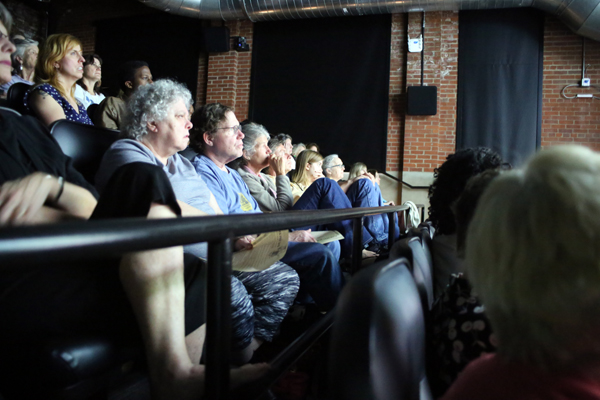 What is Alice Fest?

Alice Fest is a one-day film festival. The tagline is “Films by women. For everyone.” It is typically held in March in honor of Women’s History Month in the Full Frame Theater in Durham, N.C., in association with the Center for Documentary Studies at Duke University.

Alice Fest is free and open to the public.

Why I Love Alice Fest

Each film festival is unique. Alice Fest is a wonderful way to spend an afternoon. I highly recommend it.

I love this fest in particular because the organizer, Vivian Bowman-Edwards, does a fantastic job of screening interesting films from around the world. There are engaging conversations after each block of films. Often with the filmmakers there to represent their work.

What sets Alice Fest apart, in my humble opinion, is the community. It’s an intimate setting for film screenings, which leaves me feeling less lonely and more empowered.

It’s a moment where I feel like I’m not the only female filmmaker in a male-dominated industry, especially here in North Carolina. I mean, I already know this but it’s so lovely to spend time in the same room with smart, passionate women (and men!) who love film. I crave this throughout the year.

Alice Fest is also where I first discovered the Geena Davis Institute on Gender in Media. It’s where I first watched “If She Can See It, She Can Be It” and wept. It’s where my obsession with women in film is actually normal. I need that.

Why should you attend?

We want you there.

Alice Fest is a great opportunity to meet artists and see that they are doing really cool work right here at home. It’s a great chance to see what’s being created, meet people, and learn about new subjects.

Plus, it’s free and open to the public.

“ALICE FEST will celebrate its 8th annual festival at the Full Frame Theater in downtown Durham NC on Sunday, March 10, 2019. Doors open at 2:00 p.m. for the festival and screenings begin at 2:30 p.m. Presented each year in March in recognition of Women’s History Month, the festival showcases curated and submitted work by a diverse group of women filmmakers. ALICE FEST screens a wide variety of short films, documentary, narrative, experimental, animation, or multimedia projects and clips from works-in-progress.

A new feature for 2019 is a networking workshop and panel discussion preceding the screenings. Women who watch, support, make, curate, program, educate, broadcast, or write about film and media are invited to attend. The doors open for the workshop at 1:00 p.m. and the program begins at 1:15 p.m. with a panel of local programmers, curators, broadcasters and filmmakers followed by a reception and refreshments. The program will also include some sneak previews of upcoming films and a video address by Barbara Ann O’Leary, catalyst for the Directed by Women initiative, a worldwide event in September of each year.

Admission is free but reservations for both the workshop and the screenings are required due to limited seating.

RSVP to infoAliceFest @gmail.com to reserve a seat. You must include your name, email address and indicate if you plan to attend the workshop and/or the films screenings.

REMINDER: March 10th is the day to “Spring Forward” to Daylight Savings Time, so don’t forget to set your clocks ahead one hour so you don’t miss a minute of ALICE FEST!”