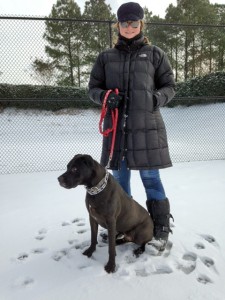 My husband took this picture earlier this week. That’s our dog, Louie, a pit mix who seriously loves the know.

This week was a little unusual. We got a lot of snow for this area and it stuck around for a while. Both are pretty rare here in Raleigh, N.C.

One of the things I love about snow is the chance to my winter gear. Most of it was acquired while making Abandoned Allies years ago. They bring back fond memories.

I went to Chicago in 2008 to interview the late Dr. Gerald Hickey, an anthropologist and expert on the Montagnard culture. I packed all of my film gear and my warmest coat, thinking I was well prepared. I thought that pea coat would protect me from the Chicago cold and wind, but that’s laughable now!

My friends quickly took me to a local store that specialized in winter gear. I immediately bought wool socks and a knee-length coat. To this day, that’s some of the best money I’ve ever spent. I wrote about the trip and that coat here and here if you wanna check out some old blog posts.

Goofing off with my friends in Chicago in 2008. I must go visit again soon.

A few months later I traveled to Wisconsin to meet Major John Plaster, a sniper expert and excellent writer who has documented the history of the Special Forces SOG. I stepped off the plane wearing cowboy boots. By the time I walked from the airport to my rental car, my boots were completely soaked. I felt like my toes were going to freeze.

Bundled up in front of the rental car at the airport in 2009, while making Allies. I thought my toes were going to freeze!

After leaving the airport I drove straight to Gander Mountain. There were some snow boots that seemed to fit well enough and — even better — they were seriously on sale. I forked over the cash and haven’t looked back. Those gigantic snow boots have come in handy a handful of times — even here in North Carolina.

I wrote about that 2009 trip to meet Maj. Plaster here, here, here, and here. It was an incredible time. I spent the weekend in a small town getting to know his wife and their cute dog. We spent time going through old photos while talking about life, movie making, and military history. It was pretty much a dream trip.

Both of those trips helped me appreciate how cold it DOESN’T get in North Carolina. (You should know that I start shivering when it’s about 70°. One of my Chicago friends once called that “cute” — but he was also wearing shorts while I was shivering so whateves.) Those trips made me realize I had never felt REAL cold until visiting Chicago and Wisconsin in the middle of the winter. The wind chill was reportedly -36° while I was there — bleh!

Anywhooo, I have been feeling very thankful this week. For a warmer climate but also a chance to make snow cream. For a roof over my head, electricity, a working heater, and a source of income to pay for those things. And for you guys, the ones who consistently encourage these filmmaking dreams.