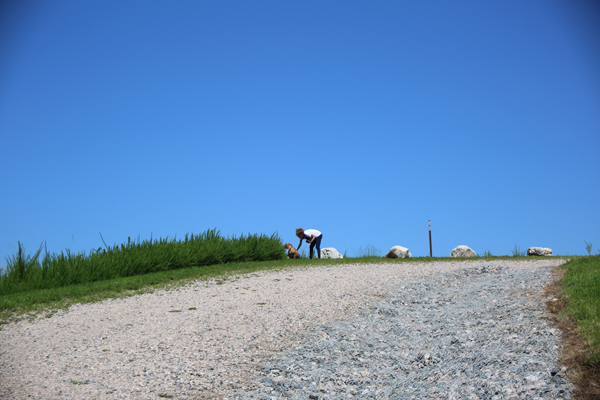 As many of you know, I’ve been working on a new film.

Well. More like working on it consistently for years. And lately people have been asking about it. How’s the film going? What are you working on now? When will it be finished?

These questions stress me out so much – in the best way possible. It could be a sign that people are kind, curious, and interested in what I’m working on and that’s a huge honor.

At the same time I am trying not to freak out because it’s going so painfully slow. I feel a lot of responsibility to get the film finished and out into the world. But I also want to make sure I’m doing the story justice and the film is the highest quality possible.

It finally dawned on me that I’m terribly stuck.

Right now, I can’t seem to finish the film. I have a few ideas about why I’m stuck. And since this is a big part of my frustration / daily life / current journey, I thought you might want to hear a little more about it.

Maybe you need inspiration, too?

Or maybe you can see things clearer from your position and you can help a girl get unstuck?

Without further ado, here are my theories on why I’m stuck and how I can potentially get unstuck so I can move on.

For years, I’ve been trying to crack the code on funding. I’ve been self-funding each film thus far, with a bit of help from crowdfunding along the way. But I am hongry for fiscal sponsorship, grants, and support.

These things could mean so many wonderful things:

Those are really broad bullet points. There are a lot of ways to go deeper on each one but for the sake of brevity, we’ll move on.

Let’s leave it at this: the space between the vision for the film and the reality of what I can accomplish without funding is causing me a lot of trouble right now.

I have had a string of unfortunate things with technology lately. In the last year my hard drive crashed. Then my computer crashed. And then all of my websites fell apart.

Yah. Last year was incredibly frustrating. But I’m thankful that this computer is still holding strong enough that I can at least blog about it! It’s more than 10 years old and I know it won’t last much longer, poor thing. I’ve put it through the ringer on each film.

I’m not bemoaning it, simply stating the facts. When you make films, tech is probably gonna fail somewhere along the way. It’s a part of the process. I’ve made my peace with that, and am really trying to solve the problem.

So I’m trying to recover from a series of unfortunate events. I really need a new computer, software, and external hard drives. But that adds up so quickly. Without deeper pockets to solve the problem, I’m doing the best I can to figure out how to get this film finished using what I’ve got available right now.

And this, ladies and gentleman, is every storyteller’s dilemma no matter what part of the journey you’re on.

While editing my films page, I realized that I was able to release a new film about once a year for a while. That is pretty incredible. I miss being able to do that.

But in those years I also got engaged, planned a wedding, sold a house, and built a home with my husband. I also had a lot of other family, full time job, and entrepreneurial things happening in those years, too.

The hustle was so real.

And so was the stress.

When the time came to grow our family, I didn’t want to be that stressed out. I filmed as much as I could on my own while pregnant and preparing to welcome our baby into the world. I am so thankful for that opportunity and a more reasonable pace of life. (As the joke at our comedy club went, pregnancy is complicated enough.)

The time spent growing our family has been so beautiful, frustrating, exhausting, and amazing. I am so grateful for the time I get to spend with loved ones. Watching our daughter grow and learn is so amazing.

Samantha is walking, talking, and growing up so quickly. Since she’s older and we’ve found our new normal as a family, I feel like I have the space and capacity to think about film again. I am so eager to use these parts of my brain and body again.

But … really I don’t know where to go with it from here.

I feel lost in the wilderness of indie film. I’m not entirely sure where to find the trail again. Sure, I’ll find it. But, I’d like to speed up that process and get back to it quickly.

If you have any revelations based on this post or our recent conversations, feel free to message me. Use the comments here on the blog, email, text, send a pigeon or a smoke signal? I’d love some help!